Our catering teams are excited to be working in partnership with Veg Power again this year to help educate children around the health benefits of eating a variety of vegetables.

Veg Power is a not-for-profit alliance of companies, organisations, celebrities, schools and parents united by a common goal: To get children eating more vegetables.

It is known 80 per cent of youngsters are not eating enough vegetables and Veg Power is on a mission to inspire kids from early years through primary school and into their teens to get into veggie loving habits they will keep for life and in turn share with their children.

The fun ‘Eat Them To Defeat Them’ campaign has proved popular when it has previously been run in our schools. Children love the idea that vegetables are taking over the world and the only way to defeat then is to eat them!

The campaign will run for five weeks from February 28 and will focus on a different vegetable every week. All our menus will focus on that week’s vegetable, with each table receiving a taster platter of the vegetable to try – they will start with carrots, followed by peppers, broccoli, tomatoes and peas.

We will hand out reward stickers for each vegetable the children try and they will also be encouraged to get involved in decorating the serving counter or creating displays in the dining room – the wining group will receive a vegetable-based cake. 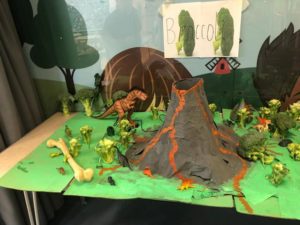 Radish’s managing director Rebecca Bridgement said: ‘We are delighted our schools are taking part in the Eat Them To Defeat Them campaign again this year. It has been a huge success in previous years and parents have told us it has had a lasting effect in encouraging children to eat more vegetables and try new foods.

‘Our catering teams have also had great fun coming up with original ideas for vegetable-themed displays – including ones which included the princess and the pea and dinosaurs roaming between broccoli trees. I can’t wait to see what they create this year!’