We are delighted to announce that Trudy Stroud, senior operations manager, has won the ‘Area Manager Of The Year’ title at the 2022 Contract Catering Awards. Trudy was one of three finalists in the category, with the winners announced at a ceremony in London on March 29.

The category called for exceptional individuals within a catering company who have a big impact on the businesses they look after. Judges also wanted to hear how nominees had: 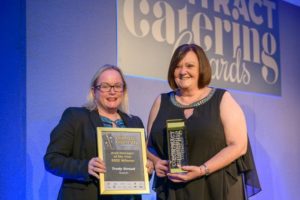 Trudy Stroud on the right

Trudy said: ‘I’m honoured to have been named Area Manager Of The Year. It’s been a tough time for a lot of us in the catering industry and I couldn’t have won this award without the support of my team. I’m looking forward to continuing to support our customers in 2022 and beyond.’

For the last four years Trudy has managed a significant Radish contract. And during her tenure, she has managed it through a re-tender as well as doubling its size. She has also recently secured a contract extension for a five-year term. Trudy is currently responsible for overseeing catering services at more than 50 sites in the south of the UK, each with their own kitchens which provide catering on site seven days a week.

Trudy has also been instrumental in developing her team. Thanks to her years of experience and unrivalled knowledge, she has built an expert team. She has developed a real strength in identifying the right individuals and cultivating new talent. She has also trained managers and ensured promotion from within, providing endless support to deliver the best possible outcomes for her client.

As part of her dedication to excellent service, Trudy set her teams up and introduced her own ‘relief team’. Traditionally the catering teams worked as a five-day and weekend operation which meant two separate teams working at set times. To manage this, Trudy instituted a ‘five days over seven’ model which sees every member of the team working more closely together and avoids a split service.

She has also almost created her own agency to flex cover as and when the business needs it, ensuring that there are people in place to work across the region. Each of these measures have resulted in a marked improvement to service levels with greater consistency over the week and better service for the customer.

Under Trudy’s management, her sites have also achieved scores of more than 95 per cent in health and safety audits and been awarded five-star ratings by Environmental Health Officers.

About the Contract Catering Awards

The Contract Catering Awards recognise the outstanding contributions to the contract catering industry from individuals and businesses. For more information, visit www.h2opublishing.co.uk/contract-catering-awards.